When to order a Jaw Motion Rehab System for Trismus Prevention from Radiation Therapy. 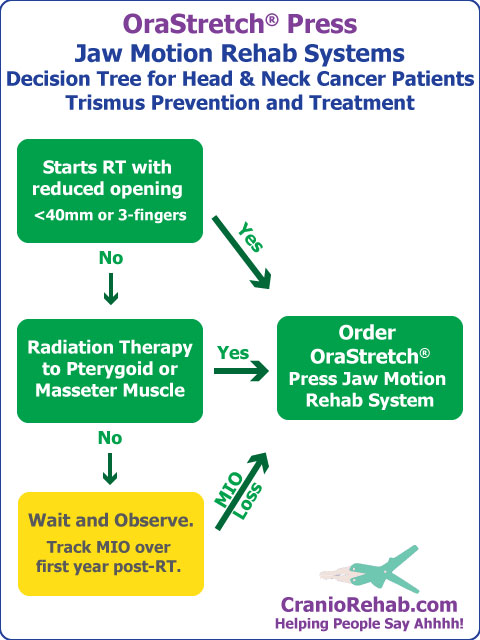 We recommend you prophetically prescribe a jaw motion rehab system like the OraStretch press to prevent loss of MIO and oral range-of-motion in two cases:
Otherwise, we recommend that you track your patients MIO weekly or monthly during the first year post-RT.  If your patient shows MIO loss of 10% or more (5mm), you should quickly start them on stretching therapy with a device to limit the loss of opening.  Preventing MIO loss is much easier than treating trismus to increase their opening 24.
Who is at risk of developing trismus?
A variety of risk factors are correlated with the development of trismus in head and neck cancer patients, including T-stage7,14, age19, and flap surgery9.  But the biggest risk factor for the incidence of trismus is radiation therapy.  There is a steep correlation16 between intensity of radiation and trismus, with as little as 15Gy capable of causing trismus12.  More specific studies have shown that RT on nasal cancer (NPC) patients show incidence of trismus in 62-85% of patients7, 9, 23, with ~90% of patients developing trismus with RT to the pterygoid muscles8.
The other high risk factor for patients is an already limited opening.  The average adult oral opening is approximately 50mm.  A recent study of trismus found that the highest risk factor was patients starting with <40mm MIO128.
All research and footnotes can be found here: www.craniorehab.com/references
Share |
Previous Post
Next Post
The CranioRehab.com Blog

I agree to allow CranioRehab.com to store and process my personal data as described in the Privacy Policy New Window